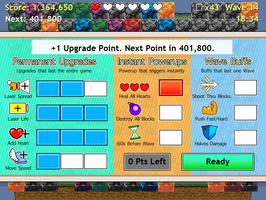 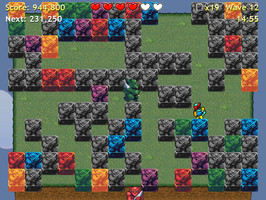 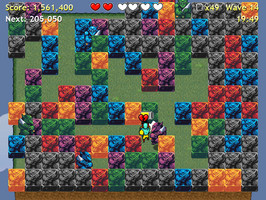 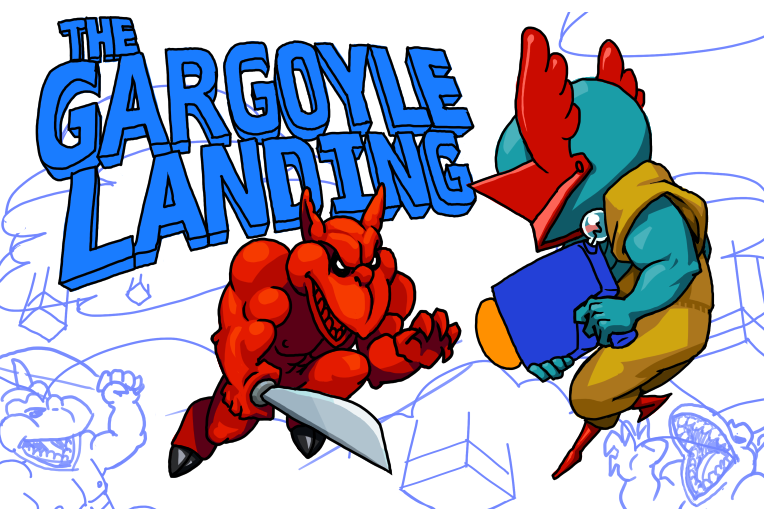 Despite being in game development for 9 years, I’ve only participated in a game jam once before. The last one was a 7 day jam and I way over-scoped the project. This time it was different.

I originally didn’t expect to participate in Ludum Dare 42 at all, but was interested in people’s process. After spending a few minutes in a Twitch channel helping a team come up with ideas, I came up with an idea that I pitched to the channel, of which they didn’t go with, thinking it was too ambitious. I was so baffled by how it could be “too ambitious” for a team with 3 engineers, and me being a self-taught programmer, thinking it was actually pretty simple, I coerced myself into just going for it.

There were a few key events that made this harder than it had to be from the start. (1) My reading glasses broke earlier that day, and (2) I decided to try and learn GameMaker Studio 2 for the project. These two things teamed up on me, almost like a conspiracy to get me to fail.

I give a lot of credit to the original GameMaker (before Yo Yo Games bought it) as getting me interested in game development back when I was a teenager, so I was not wholly unfamiliar with the program. However, GMS2’s drag and drop features were much, much different from what I was used to, and I ended up just using the “code” panel for everything anyway. And this is where the lack of reading glasses came to help with my downfall. In addition to the confusion of scrolling windows within windows, the drag and drop code panel has such tiny text that only artifacts when enlarged, it strained my eyes more than I realized. That only made the frustration with figuring out the arcane way GameMaker uses arrays that much worse. It only took a few hours to develop migraine that lasted almost the entire weekend.

This was after I already asked Crispy to do the sprites, of which she managed a 4 direction static of the gargoyles. I was giving up and had her stop immediately, as to not waste any more of her time. I thought I was done.

Feeling a bit like a failure, as I’ve failed at a jam before, I was especially upset I couldn’t even get the fundamental block interaction to work. That Sunday afternoon, sitting in bed with my newly fixed reading glasses, I decided to do at least that.

And it was easy.

Maybe it was having a new direction (completely ditching the array grid idea), maybe it was that I skipped the drag and drop feature in GMS2, maybe it was the unstrained vision, but the block interaction was working beautifully in only an hour. I thought to myself, “Hey, I can still do this!” I managed to convince Crispy to pick up the art again and she managed to do the blocks in time.

After many hours, I had a game. Not a fun game, but a game. And time was up, so I turned in what I had–with whatever placeholder stuff was still unfinished.

Among those placeholder stuff was the “Hero” sprite. The placeholder sprite was ripped directly from my current project, which is a dungeon crawler. I’ve gotten a few mentions of how weird it is that he’s shooting lasers from his sword, but no one cared when “Zelda” did it in the original game (and that shows how much we knew, as we all assumed Link’s name was Zelda)!

Another placeholder was the half grid instead of a full grid. I had absolutely no time to playtest my game very thoroughly, so I went with a lot of early assumptions. One of those assumptions was it’d be interesting to have misaligned blocks. I thought it’d make a more organic feel, but still have a grid so alignment wasn’t too difficult. And even I saw that that was a terrible idea after playing for a short while after the submission. By then, though, it was what it was.

And then there was the health. I never played my own game long enough to notice it took forever to die! The game just went on, there was little consequence to avoid the gargoyles. The game ended when you got bored of playing, which sounds like just how all games go, but not when you mean within the first play session. To be completely candid, I changed the health from 100 to 10 and updated the submission, since it was a tiny change, I forgave myself that small edit during “submission day” (i think?).

And finally, the infamous placeholder design idea of being able to shove the blocks off the cliff. This one was put in by necessity. Right up till almost the end, I had the blocks just being pushed out of the play area ad infinitum. I needed a way for them to be disposed. Pushing them off the cliff seemed like a fair trade of not getting points and leaving yourself vulnerable while pushing, but that wasn’t how it played. It was one of those small things that ended up kind of breaking the game; It made it not fun, more-so than even the half-grid and copious health.

The game was not fun, but I felt like that was due to the time constraint. And I knew I could have done it if I had the whole 72 hours, so as a proud designer, I had to prove to myself I could make it fun. So, with some help from feedback during the jam, I think I did that.

The Post Jam version took about a week, since I took my time to make sure it ran smoothly (I’m actually very thorough when I have the time). I added all the tier-one features on my list, including Laser spread, health bar, waves, upgrades, and even hero art. Although the art is still minimal, I felt like I succeeded in making the game I originally had in mind. And, for me at least, it was finally fun.

Changing the grid from half steps to whole:

The whole step was the first thing I changed, it was the most awkward thing in the game. People couldn’t even tell it was on a grid at all, as the expectation was to snap in a one-to-one fashion, anything less just felt wrong. 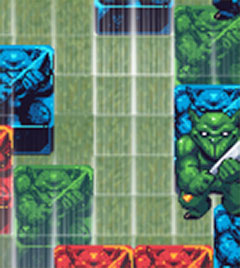 No one seemed to get what they did. And thus they were not an incentive to clear blocks. So they just simply had to go. It was ugly anyway.

Third was the cream of any good shooter game: Upgrades: 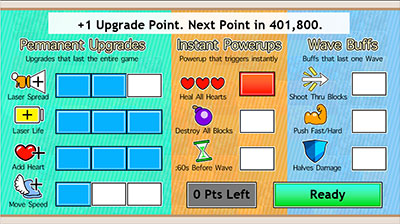 They were in the feature list from day 1. Having the ability to cash in your progress to become stronger is essential to make your progress feel rewarding and make a player want to keep playing. I think that addition alone pushed the game over the “fun” bar. You had a goal (kind of), you had incentive to clear blocks, you had replayability in what you choose to upgrade. This is what took the most time in the post jam development, and it was necessary.

And finally, the addition of grey blocks: 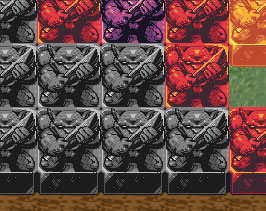 This fixed the problem of just pushing blocks off the cliff. As fun as it is to do that, there had to be a penalty for it.

Over that same week, I was playing a lot of Puyo Puyo Tetris with my friends. I’ve never been a fan of either of those games before, my passion for puzzle games began and ended with Dr Mario, and those skills just didn’t transfer. But I did learn the value of something that didn’t really exist in Dr Mario’s competitive gameplay: grey blocks.

In Dr Mario, combos will drop colored blocks onto your opponent, which can stop them from doing that combo they were setting up, but only for a little while. It may just as easily set them up for a bigger combo. It’s not exactly the best way to incentivize comboing if it doesn’t really do much to the opponent. Puyo Puyo is different, though. And it just felt so obvious after it came to me. Even though it’s a single-player game, that mechanic can still work as a disincentive. So pushing off blocks works as if you’re comboing on yourself, essentially. Those blocks don’t go away, in face, you’re just kicking that can down the road, and it comes back bigger and heavier (so to speak). To clear them, like in Puyo Puyo, you had to clear next to them, and thus they were the biggest threat in you “running out of space”. It was just the most elegant fit.

With the addition of grey blocks, I noticed the problem of becoming overwhelmed with grey blocks; it can escalate very quickly. And also within the vein of these Puyo Puyo and Tetris games, even though you can play forever, there needs to be a final game over point for when you’re overwhelmed, or despite the player never being able to recover, their frantic stubborn mind won’t ever let them stop trying. It’s no fun playing a stressful situation like that, just waiting for the inevitable. You need to stop the player before they feel like they need to quit out of frustration. So similar to depleted health leads to your end in a twin-stick shooter, too many grey blocks will lead to your end in the matching game. Getting 50 or more blocks in the game is also a game over.

And so, the game truly becomes just as much about clearing the blocks as it is about avoiding and killing enemies.

This truly was a fun adventure for me. Having to make a game in such a short amount of time exercises your ability to prioritize and scope. And most of all, it gives you the opportunity to strip a game down to its core purpose: to be fun.’

Thanks to all of you who gave me feedback and helped me make this game!